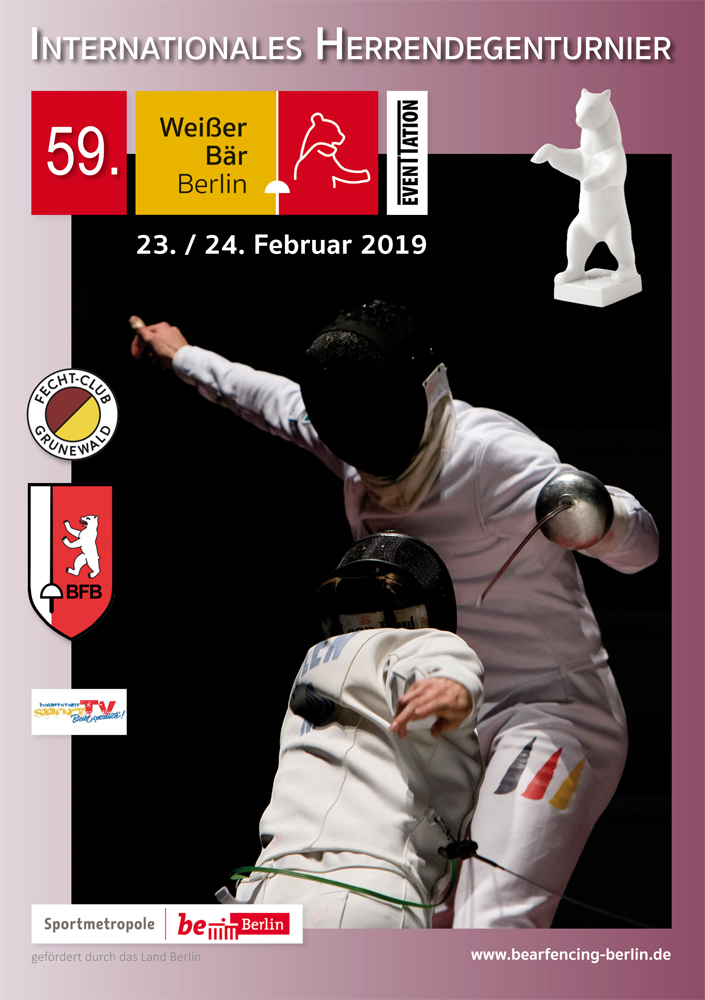 The countdown is on, on the 23rd and 24th of february 2019 the sports metropolis Berlin will again host the "White Bear". For the 59th time, the international epee tournament attracts fencers from all over the world to Berlin and making it one of the three oldest tournament series in the capital.

After a three-year break, the Horst-Korber-Sport Center in the Glockenturmstraße at the Olympic Stadium is now the site of the fencing competitions. On 24 lanes, around 250 fencers fight for two days to the qualification for the semi-finals, which traditionally take place on Sunday afternoon as a gala finale in the historic dome hall in the House of the German Sport.

Also the fencing offspring may cross the blades parallel on sunday. The international student tournament for foil, 12th "Little White Bear", will take place on Sunday from 9:00 am in parallel in the Horst-Korber-Sport Cnter. The final fights of the four age- and weapon groups will also be fought out during the Gala Dinner in the historic dome hall.

Experience the fascinating fencing sport up close on Saturday and Sunday in the Horst-Korber-Sport Center with free entry. Do not hesitate too long to secure tickets or VIP tickets for the spectacular fencing show at the gala finale in the historic dome hall of the House of German Sports. Space is limited. We looking forward to seeing you.

Day 1 of the 59th „White Bear of Berlin“ is over, finally 236 participants from 29 countries crossed swords at the Horst Korber sports center this morning. 64 participants are still in, among them Uwe Kirschen (SC Berlin), Michael Behrendt (FZB) and two Berlin fencing veterans as well as the Latvian Vadims Kulesovs (FCG).

Tomorrow we go again at the Horst Korber sports center (HKS) at 09:30 am. The knock out stage identifies the best four until noon, who then fence for the tournament win in the gala finale at the historic dome hall in the House of German Sports.

Also tomorrow at 09:30 am starts the 12th “Small White Bear” at the HKS. The foil juniors under-11 and under-12 will fight for their medal. The final bouts will also be held in front of the large audience in the historic dome hall.

Visitors get a free entrance into the HKS, the ticket hotline for the gala finale will be open until tomorrow morning on eventim. There is a free shuttle bus service between the HSK and the dome hall available.

Tristan Tulen ist he winner of the 59th „White Bear of Berlin”. The 28 years old Dutchmen reaches his long-term goal on the third try. In 2017, he was sixth, in 2018 already on the steps with bronze. Now in 2019 he stands on the top and is celebrated by around 500 spectators in the historic dome hall.

In the semi-final, dominated by the German épée elite, Rico Braun from FC Tauberbischofsheim prevailed with 15:10, while in the second semi-finale the number 1 and 2 from the German ranking list faced each other. Marko Brinkmann won against his team colleague Lukas Bellmann from TSV Bayer 04 Leverkusen with 15:12.

The finale was not undecided for long. It was clear early on, who focusses more on the win. Tristan Tulen could prevail at the end with 15:12. Brinkmann, only 21 years old, became second, but with that, he won the under-23 valuation of the European Fencing Confederation.

Best Berlin fencer and therefore special prize winner of the Berlin Sports Federation was Michael Behrendt of the Fechtzentrum Berlin e.V.: “ By this a little dream came already true”, said the 44-year-old afterwards. The next big task for the leader of the Berlin ranking will be in Cognac (FR) where he will start at the Veteran European Championship (40+).

The 59th “White Bear of Berlin” was a completely successful fencing event especially in connection with the 12th “Small White Bear of Berlin” on Sunday. Athletes and audience gave all a positive feedback, helpers and organisers were a great team, supported by the sports metropolis Berlin, premium partner Eventtation GmbH & Co. KG and many other sponsors. The media partner Hauptstadtsport.tv was also again both days on site and created interesting programs, which can be found in the media library. We congratulate all participants and winners to their performances and say thank you to all supporters, and look forward to the anniversary 2020.